What is Morning Star?

For this pattern to be formed it is extremely important: 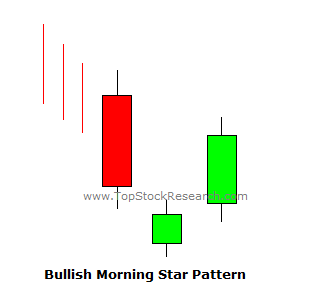 The strength of this pattern depends a lot on the size of the candlestick. The bigger bearish candlestick formed on day 1 in continuation of previous downtrend, shows the market sentiments is strongly under the control of bears. The second day formation of small candlestick (either bullish or bearish or neutral) with a gap down indicates that the bears are still holding the position but they are not able to push the price much lower further indicates that the bears strength is loosening. A bullish candlestick on day 2 speaks a lot more about bears weakness. Formation of long bullish candlestick on Day 3 confirm the pattern and shows that bull are taking over the market over the bulls strongly. If the third day candlestick opens with a gap up and closes above or atleast near the midpoint of the Day 1 candlestick, it indicates a strong trend reversal and a buy signal.

Morning Star Candlestick Chart Pattern by itself is useful in confirming trend reversal but one has to see the overall market and other technical indicators for its strength and reliability. Many traders also use price oscillators such as the MACD and RSI or volume to confirm the reversal.

Others uses the size of the candlestick to see the reliability of this patten.

Precautions to be taken while utilizing this Pattern:

1.It is important to reconfirm the pattern by integrating this pattern with the study of other technical indicators. Therefore adding any one of the other indicators like Volume, Stochastic, RSI, MACD etc. with chart patterns, one can further enhance the probability of the pattern reliability.
2.Like if this pattern is formed at the bottom of a downtrend together with overbought condition then it further strengthen strong buy signal. If it is formed in an uptrend or in sideways market it is of no significance. 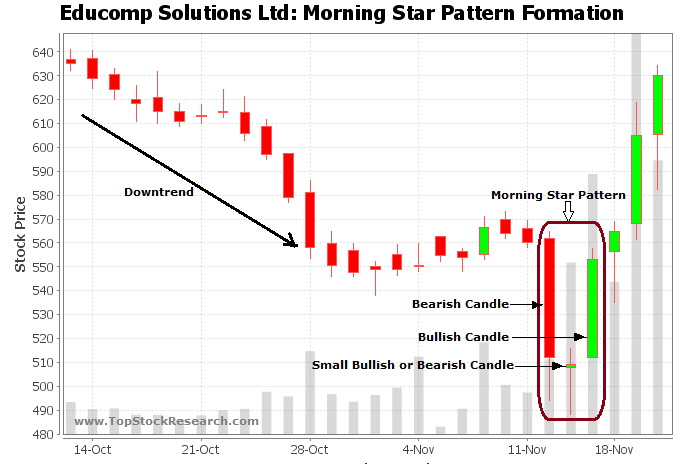 Our website provides free Stock screening based on Different Bullish Candlestick Pattern. It can be found at below link: